Are You Texting a Contract? 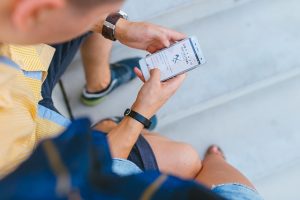 Texting has become a common form of communication. Smart phones are used less and less as phones and more and more as devices to text and email from. You may see texting as an informal, short hand way to communicate but a Massachusetts case shows you need to be careful with texting because the messages you send may be interpreted by a court as creating a binding contract.

The Massachusetts Land Court ruled in April that a series of text messages between two real estate brokers concerning the purchase and sale of a commercial building may be enough to constitute a “writing” meeting the requirements of the Massachusetts Statute of Frauds. In the St. John’s Holdings, LLC v. Two Electronics, LLC, case the court denied defendant’s motion to dismiss arguing the communications at issue were insufficient to be a contract for sale of real estate. The judge found the communications between the parties,

The lawsuit concerns the attempted purchase of a commercial building. The brokers for each side discussed the proposed deal in person and put the terms of the agreement in a letter of intent (LOI), which was further discussed and later changed. The brokers continued to negotiate the $3.232 million deal through emails and text messages. They included,

The sale didn’t actually happen. Instead of following through with the LOI the seller’s principle took another offer to buy the property. The jilted buyer/plaintiff filed a lawsuit to enforce its rights because of an allegedly binding letter of intent to purchase.

If you are negotiating through writing (texts or emails) you may want to include qualifying language to the effect that,

Parties to a potential real estate sale need to be cautious with letters of intent. If there are negotiations leading to the writing of an LOI containing the essential terms of a contract to purchase, it should expressly state it is not intended to be legally binding. Otherwise it may be enforceable if a court finds both sides agreed to its terms.

If you are involved in a contractual dispute or a disputed sale of commercial property contact our office so we can discuss your situation, how the law may apply and the best ways to protect your legal rights and interests.