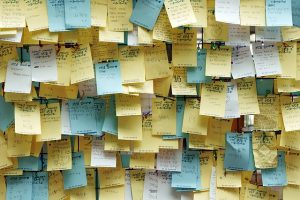 It’s hard to imagine life before the Post-It Note. Thanks to the just sticky enough pieces of paper reminders and lists can be put in all the right places to remind us of what needs to be done. One man who claims he’s the original inventor is suing 3M, Post-It Notes’ maker, for allegedly failing to live up to a settlement agreement of a prior lawsuit he filed claiming the company wrongfully claimed it’s the rightful inventor.

Alan Amron holds 40 U.S. patents, according to the Associated Press (AP), but what gets most of his attentio is the invention for which he’s not getting credit, the Post-it Note. Amron states he invented an earlier version, the Press-on Memo, in 1973 a year before 3M developed their product. Amron settled a prior lawsuit against 3M but he’s back in federal court in Fort Lauderdale, Florida, claiming 3M breached its previous, confidential agreement not to take credit for the invention.

He’s seeking $400 million in damages and an admission that Amron invented the product. “Every single day that they keep claiming they invented it damages my reputation and defames me,” he claims.

3M claims Post-it Notes were invented by their employees Arthur Fry and Spencer Silver. Silver supposedly came up with the adhesive and Fry had the idea of using it for small, yellow squares of paper. The company states neither Amron nor his Press-On Memos had anything to do with the development of their product. 3M told AP they’re within their rights in the prior settlement to claim credit for creating the Post-it Note.

Amron states in 1973 he stuck a note on his refrigerator with chewing gum. That lead to the development of his product which he discussed with two 3M executives at a trade show later that year. Amron states nothing came of the meeting.

3M states its original Press ‘n’ Peel memo pad was developed in 1974, didn’t reach the market until 1977 and didn’t become popular until 1980. It’s now 3M’s most popular consumer product. Sales of all of 3M’s products amounted to about $30 billion last year.

In 1997 Amron sued 3M claiming he was the true inventor. The case settled and Amron agreed to release the company from any future claims. He states that in the agreement both sides agreed neither party could claim credit for the product. 3M planned on filing a motion to dismiss, the judge has ordered the parties to try mediation to settle the dispute and no trial is currently scheduled.

Legal disputes over who invented or who has what legal rights concerning a product are not uncommon. Creativity is key to developing new products and patent protection is one way an inventor can control and profit from an invention.

Through a licensing agreement an inventor can sign a contract with a party to manufacture, market and sell the invention in exchange for compensation. Inventors need to take precautions when going through this process to prevent a manufacturer from stealing ideas or designs from an inventor during the negotiation process.

If your business is involved in a patent or other intellectual property dispute, contact our office so we can discuss the situation, how the law may apply and the best ways to protect your legal rights and interests.