organization ISIS holds much territory in Syria and Iraq and has inspired attacks in Europe and California. It engages in genocide, recruits child soldiers, has given its blessing to the rape of enslaved women and broadcasts mass murder regularly on the internet. In addition to a long list of war crimes it also violates copyright laws.

Many artists are not surprised if their works are used without permission, whether it’s photos, artwork or music. In one instance a piece of art created in the hopes of stopping violence is being used by ISIS to promote it, according to Fstoppers.

Brian McCarty created a number of photographs based on drawings of refugee children. He works with them by using art therapy to help them cope with their situation. The image, entitled “Cinderella” is from his series WAR-TOYS. 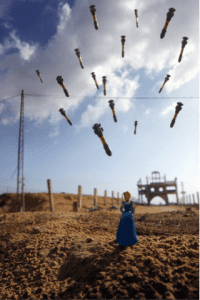 McCarty used a drawing of a crying child surrounded by soldiers as inspiration. He took toys he found amongst the refugees and nearby wreckage to create the photo above. He found his image on a photo theft alert website and he sent it to a few Arabic speaking friends. They confirmed it had been stolen and used as war propaganda by ISIS.

They took the photo and altered it so that their flag and an open Quran are being protected by a bubble (below). The text reads, “Even if war destroys everything, the Islamic sign and state is protected and will never fall down.”

Though McCarty could have a case for copyright infringement he’s not going to court. He said even if he could collect damages he would never accept money from a terrorist organization. McCarty plans on continuing his work helping children who are the victims of war.

There is no such thing as an “international copyright” that protects a work.

If you own a copyright that you believe has been infringed, either here in the U.S. or overseas, contact our office. If the law’s been broken by a criminal gang or terrorist organization your options may be limited, but we can discuss the situation anyway. Creativity isn’t limited to the art world and copyright infringers, it can be very handy when engaged in litigation too.