8 Interview Questions May Get You Sued 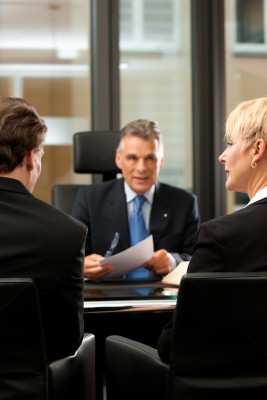 Thank you for allowing me to talk to you for next few minutes. By the end of this video, hopefully, I can give you, an employer, a clear picture of what to say and what not to say during job interviews.

A few years ago, I had the privilege of representing a client called Sam. He was a very successful businessperson who owned a 40-unit apartment here in Orange County. One day, a prospective tenant called his organization to inquire about the availability of an apartment, and during the conversation, she told the manager that her son had problems getting up and down the stairs. The manager asked her what was wrong with her son. Now, this question was innocently expressed as a genuine concern from one human being to another, yet it was perceived as discriminatory and a lawsuit followed soon after.

And as we’ve been hearing over the last few weeks, the economy is booming. Yesterday, I saw a blog article about employers having a hard time filling positions, and today, I saw a news report that said the United States has filled about 213,000 jobs and is beating expectations.

That’s right. The economy has improved, and as a result, we are seeing a great number of employers and business owners interviewing and hiring additional staff to meet the demands of their expanding businesses. So, during the interview process, I think it’s important to know what to say and what not to say so that your questions will not be interpreted as discriminatory.

Now, before we get to the eight questions that can be misinterpreted in interviews, as an example, let me briefly tell you what you definitely cannot ask job candidates You cannot ask them about where they live; their age; their arrest record; their nationality, race, or color; their religion; their gender or sexual orientation; their credit history or financial status; their family or marital status; or whether they are pregnant.

The eight questions that I’m going to discuss in just a few minutes all have something in common: They are all vague in the sense that they may be misinterpreted to be illegal enquiries about information covered by the categories that I just mentioned.

So, let’s get to the eight questions. By the way, the specific questions are just examples; there are many ways that you can ask the same thing.

This might be misinterpreted as an enquiry about socioeconomic status or places where there is a concentration of a specific ethnic group.

This could be a seen as a way of finding out how old the interviewee is, whether or not your intention is innocent or not.

This may also be seen as an attempt to find out a person’s age: Again, the intention may be innocent.

Above two question may be misinterpreted as enquiries about job candidate’s criminal records.

This is an obvious enquiry about nationality or race.

Now, you might ask, “So, Tony, why can’t I ask any of these questions? What can I ask and do?” OK, if this were a live training, I would ask you to draft the questions that you want to ask your potential job candidates. Or if you already have a list, I would ask you to review them to see whether or not they are open to misinterpretation or misunderstanding. Obviously, we cannot do that in this session, so that’s why I want to ask you to do this exercise in your own time: List down your interview questions, and then go over them to make sure that they are specific enough and not so vague as to be open to misinterpretation or misunderstanding.

The other recommendation I would offer you is this: during interviews, avoid engaging in small talk; focus only on the job, the tasks, and a description of what you want them to do. In this way, you will not go off on tangents by asking how their families are or trying to be friendly with them. Once we start moving in these directions, we tend to want to ask them a little bit more about their backgrounds, themselves, their families and children, and things like that. You can do this once they’re hired and, if you like them, after business hours so that you can get to know them a bit better and build some trust with them.

During the interview process, when you are face-to-face with a stranger almost, it’s better not to ask these types of questions during small talk. Avoid small talk and really avoid you to gain to that area that you might be, or your intent might be-

The other thing to watch out for during the interview process is making promises that you may not be able to keep. For example, if you really like a particular applicant and you see a lot of potential in him or her, you may try to entice him or her by sweetening up the deal; for instance, you might say, “We’re just starting out, so this is all we can give you right now, but if you stay here for two or three years, we might provide you with a bigger bonus or a profit-sharing deal.” Once such a promise is made and the applicant remembers it, it might became a binding contract and you may have problems two or three years down the road when he or she asks you for the reward you promised. So, that’s something you need to watch out for as well.

Hopefully, I have answered your questions, and if you have any further questions about this area, give us a call. We are the professional in-house counsel for many business here in LA and Orange County, and we are always ready to help.