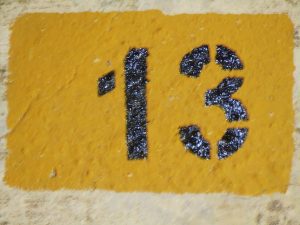 “Lucky 13” wasn’t so lucky for pop star Taylor Swift who found herself being sued by Blue Sphere, a seller of clothing of the same name based in Orange County. The lawsuit was filed in May 2014, according to the Hollywood Reporter, and settled in November. The terms of the settlement agreement are confidential. Blue Sphere accused Taylor of infringing on its “Lucky 13” trademarks which it has held since 1991, reports Rolling Stone. The trial was expected to start in January.

Her website describes the 25 year old Swift (whose birthdate is December 13) as,

What got this rich, famous, pop star and Person of the Year runner up in hot legal water? According to Blue Sphere’s allegations Swift started using “Lucky 13” on a line of t-shirts in March 2012. She also worked with American Greetings Corporation to sell Lucky 13 greeting cards, which included a Lucky 13 sweepstakes promotion. The company accused Swift of harming their brand and confusing their target audience.

A normal part of the civil litigation process is to have the parties testify under oath prior to a trial at a deposition attended by attorneys by both sides.

Plaintiff’s legal team aggressively sought evidence to support their client’s claims which Swift claimed was a form of harassment. The attorneys,

Blue Sphere’s attorneys stated their efforts were to try to determine,

Swift is no stranger to trademarks. Her managers have trademarked numerous lyrics and phrases popularized by the singer which appear on her current tour merchandise.

If you own a trademark that’s being infringed, whether by a world famous musician or not, contact our office so we can talk about your rights, how the legal system can be used to protect your rights and your potential damages.