Do Your Notarized Documents Contain Language Required by Law? 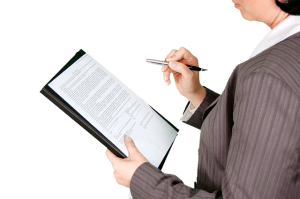 A new consumer notice is needed in all documents requiring a notary certificate in California as of the start of the year. If a notarized document you need does not have this language, it may be rejected by your county recorder, according to the First Tuesday Journal.

This notice should be in a box at the top of the certificate, stating: “A Notary Public or other officer completing this certificate verifies only the identity of the individual who signed the document to which this certificate is attached, and not the truthfulness, accuracy, or validity of that document.”

There are some documents that have no legal effect unless they’re properly notarized. This requirement is to protect against possible fraud. The use of a notary is a step to try to ensure that the person signing the document is the person named in the document and is not being compelled to sign against his or her will. As the new notice states, a notary can’t guaranty the accuracy or validity of the document.

Without the required language there may be about a 30% chance it will be rejected by the county recorder, according to a recent survey by the Notary Bulletin. Its findings include,

California has 58 counties. Each county recorder can interpret these new requirements differently. Some may be sticklers to following the new rules while others may be more accommodating. The rejection rate throughout the state varies widely. Some recorders state they’re rejecting 30% of documents while others are rejecting as few as 5%.

Contact my office if you have questions about legal documents, or a document you’ve submitted has been rejected by a county recorder.